[Verse 1: Yelawolf]
Yelawolf, Yelawolf, get a handle
Get a grip, get ammo
It's the return of cammo
A hick with a hit's, a trick with this Kango
Anywhere can't do anything and I chewed, I sticked to gets me this candle
Lid and descry, but this candles's been lit, by this vandal
Eminem thinks this kid's sick and dismantled
From the triage in Atlanta
To the sea in Alabama
For me to be another channel
For you, to serve things scrambled
Top form and alive, I bust so much fire that my dick's a Roman candle
Sip sore pound, sip so much Jack that my last name should have been Daniels, yeah

[Bridge]
And I'm standing on this fucking stage
I come from the bottom of the bottle to the top here, I’m talking lemonade
Fuck lemon's, bitch look at me now, Shady
Put me in the front row, baow, crank it
I need to (hear louder)

[Verse 2: Yelawolf]
My accent's no accident
My tracklist just got classics
I'm radio, I'm active
Yeah, pick it up, you (Need to hear)
They told me that I wouldn't do shit
And that I wouldn't make it
I just smiled and grabbed my nuts, fuck 'em
Sometimes you (Need to hear)
Cause when I realize, I'mma doubling me one debt wherever the fuck up what I get
I never look back and I told my damn ho "everywhere I'm with you" (Need to hear!)
I was kicked down and kicked again
'Till I was kicking in
Every lock and hedge
Dropped my friends, try to hold me back
So I can hit the road and rock again
And there they are

[Verse 3: InkMonstarr]
Instead with some girls fresh
That band's gotta go, friend
That ride got a cobra
Come a text and
This bubba's just like I'm stooping
Motherfuckerer ain't a fuck, shit
Jerry, I wiz lighter
Like a motherfuckinging caca
Shady record used to ride
Nigger that's an encore
I gonna make it with my mamma
I made it
(I'm playing with my mamma) 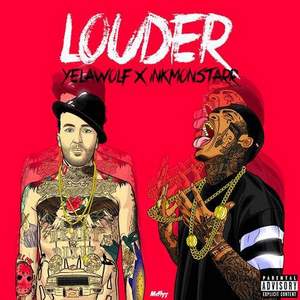